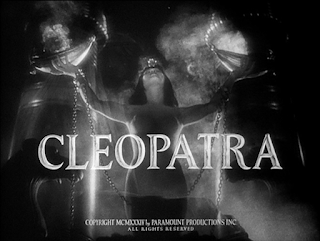 Claudette Colbert was tired of being a sex symbol.

It all started in 1932 with The Sign of the Cross, an elaborate spectacle that director Cecil B. DeMille had managed to put together on a shoestring budget. The film is almost comically lurid, and between the scantily clad women being fed to crocodiles and the “Dance of the Naked Moon” it’s not exactly the standard Christian Epic. It made money, though, and Colbert’s part had been pretty good.

She played Empress Poppea, the beautiful second wife of Nero. The best of her scenes take place in a milk bath – “real asses’ milk” according to DeMille at a press conference, but in actuality just regular old powdered cows’ milk. The lights kept heating it up, so it soured quickly and smelled terrible; nevertheless, Colbert powered through her discomfort and delivered a memorable and intriguing performance.

That didn’t matter at all, though, because everybody was talking about her boobs. You could see ‘em when she was in the tub! 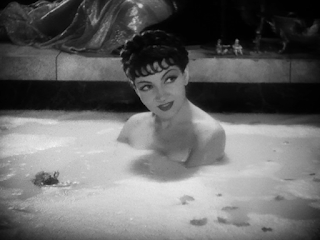 Even the Catholic Church was talking about Claudette Colbert’s popcorn catchers, and cited them as a reason they were forming the Catholic Legion of Decency to combat objectionable media. True fact.

It was understandable, then, that when 1934 rolled around and she was asked by DeMille to play Cleopatra she was hesitant. For the most part, history had painted Cleopatra as a seductress who used her perfumed wiles to get powerful men into bed with her.

The Romans had won the war, with her rival Octavian left standing to be in charge of the telling of the tale, and it was his version that trickled down to Shakespeare – responsible, for the most part, for the inaccurate elements that have become best known – and through Shakespeare into lavish Victorian paintings. But the Egyptology craze that had begun in the 1920’s was changing what the average non-Egyptian knew about pharaohs, and it soon became apparent that there was more to Cleopatra than a pair of soft lips whispering into the ears of powerful men.

Despite having appendicitis, Claudette Colbert agreed to do the picture.

(Remember all of this when you hear old stories about her being a difficult actress. She showed up to work a twelve hour day in a stinking pool of milk, did her next film with an exploding organ in her body, and was literally always on time with her lines learned, starring in three of 1934’s biggest money makers and critical successes. Then she wanted to take a vacation and asked for a raise, and boom. Difficult.) 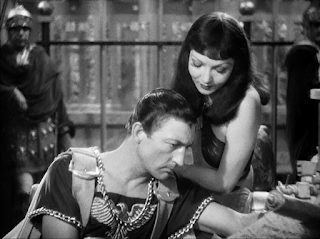 With Warren William and his Barrymore-reminiscent profile joining as Julius Caesar, and newcomer Henry Wilcoxon set to play Marc Antony, things work out pretty good on the casting front. William was the king of the Pre-Code era, and like Caesar he would find himself becoming controversial as a new empire rose from the stones he had helped set. In his case, it would be a Hollywood changed by censorship and uncertain how to handle the mix of heroism and ethical dubiousness of his usual characters. By his early death in 1948, he was already a faded star.

Wilcoxon, on the other hand, would continue a long and fruitful career with DeMille, eventually producing with him on The Greatest Show on Earth, The Buccaneer, and The Ten Commandments. Like Antony, the death of his lauded mentor meant hard times for him, and his career struggled after 1959.

Both male leads acquit themselves well in Cleopatra, with the more experienced William turning in some unexpectedly boyish humour and gliding over the clunky, unnatural dialogue with ease. Wilcoxon is a sturdy figure, rough and unpolished in looks and mannerisms, and it suits his character, even if he doesn’t give the most convincing speeches. 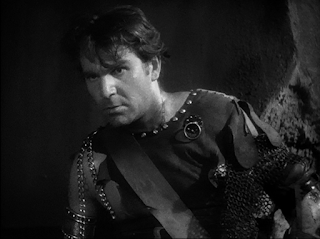 As a director, he was more concerned with what characters were doing rather than saying, and where they were doing things, what they were wearing while they did them, and how many extras could be in the shot watching. It was about spectacle. In the ‘30s – kind of like now – when people went to the trouble of paying for a movie ticket, they wanted to see something.

And, if nothing else, Cleopatra is certainly worth looking at.

The sets are dynamite. Art deco infused Ancient Egypt, gilded with gold and dwarfing the human figures with its grandeur. Highly stylized and completely historically inaccurate, the sets bring to life a concept missing in so many other films about pharaohs: that Egypt was bigger than those that ruled it. It was an ancient place even in the time of Cleopatra. She lived closer to man landing on the moon than she did to the year the pyramids were constructed, and she was doomed to be the last link in a chain that was being shattered by a Roman civil war. Early on, Cleopatra’s face is framed with an enormous sunken statue’s, the monument to the pharaoh of old slowly sinking into the sand as she begins, unknowingly, her quest to stop her empire’s demise. 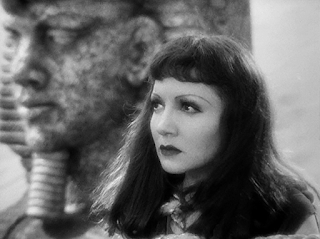 Rome is full of airy gardens, and unexpected corridors. The sequence when Caesar parades through the streets is intriguingly claustrophobic, with its square buildings and narrow streets. As though Rome is an anthill, full of very dangerous ants.

The legendary Travis Banton did the costumes. The Romans are strutting peacocks, swathed in dramatic dark velvets, and shimmering silks. Octavian, especially, looks dandified and ornamental in his white enamel breastplate, and his first outfit that looks like something you’d be more likely to see on a Star Trek pleasure planet than in Egypt. Julius Caesar, as his position becomes more vulnerable unbeknownst to him, makes a shift from heavy fabrics and dark colours, to light white tunics.

It’s the women who stand out the most, though. Cleopatra herself is ornamented in winged crowns, golden cobras, scarab amulets, jeweled collars, strands of pearls, and very little fabric. The dresses for all the female characters are extremely low-cut, and none cut lower than those of the pharaoh.

Even though she looks gorgeous, the skimpiness was not what Claudette Colbert had been expecting. And it added fuel to the Poppea-boobgate fire, stoking her image as a sex-symbol and shifting the focus away from her performance. The costuming was exactly the kind of thing she’d been hoping to avoid.

But what about the role itself? Is Cleopatra different here than in all the male-driven stories before that ignore her role as politician in favour of amping up the girlfriend-of-famous-Romans angle?

Ultimately, the story shifts gears from being a historical drama to being a tragic romance, which creates a sluggish third act and an indecisive Cleopatra. To the story – and Colbert’s – credit, we see her transform from a surly, 18 year-old princess caught up in world politics to a cool, even-headed manipulator. At the heart of her motivation is Egypt. A massive inheritance, mired in symbolism and tradition, that she loves above all other things.

Until Antony comes along, and reverses her seduction so successfully that she would hand Egypt over to its conquerors rather than risk his life. 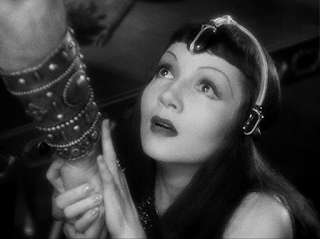 Apart from having little bearing on what was actually going down during the Roman civil wars and the formation of the Roman Empire, it’s a blow to her characterization. Egypt is presented as the prize throughout, and when she tries to sign it away to Octavian, it’s an undignified and soppy moment for Cleopatra. (Albeit, it’s a sincere improvement over Theda Bera’s silent 1917 Cleopatra, who was a tyrannical sex-fiend with no sense of duty to her country.)

She becomes, unfortunately, defined by her romantic entanglements, rather than the nation she leads or the culture she’s desperately trying to preserve.

When all was said and done, Claudette Colbert managed to leverage the role into a new on-screen identity, though. It showed her what she didn’t want to be, and its box-office success and Oscar nominations, along with her other 1934 project, It Happened One Night, proved she was capable of carrying an impressive range of roles. She vowed that she would never, ever play the scantily clad seductress again, and she never did.

But that’s not the last we’ll hear of Cleopatra this week! Tomorrow, we’ll be looking at the 1963 remake starring Elizabeth Taylor in some game-changing eyeliner.

And don’t forget to check out all the other fantastic entries in the Royalty on Film Blogathon! 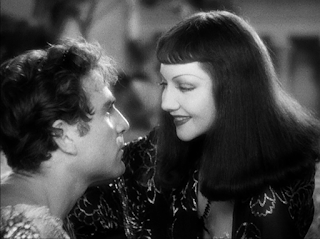