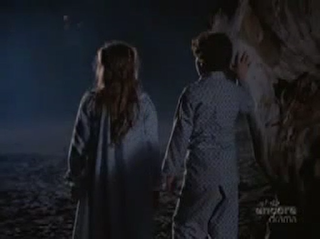 Is it ghosts or madness?

It’s one of the core questions of paranormal plotlines. In Henry James’s The Turn of the Screw, in Shirley Jackson’s The Haunting of Hill House, and in John Saul’s Cry For the Strangers. Is it ghosts or madness? And which one is scarier?

This post is for Realweegiemidget’s Darlin’ DallasersBlogathon, an event dedicated to checking out the non-Dallas work of Dallas regulars. I picked Patrick Duffy, who starred as Bobby Ewing – the initial main character of the lauded primetime soap, and originator of the “it was just a dream” shower reveal. Also, he sometimes hangs around with this crab:

In 1982, Duffy starred in a TV movie adaptation of Cry for the Strangers.

He played psychologist Brad Randall, a man tired of the Frasier Crane Seattle psych scene and in the mood to shake things up in his life. He and his wife, Elaine, decide to move down the Olympic peninsula to a creepy little town called Clark’s Harbor. Having lived my entire life in the PNW, I can tell you straight up that Clark’s Harbor is a weird place, and not just because of the looming threat of the supernatural.

“And it did look like a picture-postcard New England town. The buildings that clustered along the waterfront were all of a type: neat clapboards, brightly painted, with manicured gardens flowering gaily in the spring air.”

The film faithfully represents this, making Clark’s Harbor look and feel like Cabot Cove’s prettier, more bedevilled cousin. It’s bizarre. I have no idea why you’d go to all the trouble of setting something in Washington just so you could make it look like New England. Why wouldn’t you just set it in New England?

Anyway, the town is peopled with the usual New Englanders, including a reticent sheriff played by Brian Keith, fishwives and fishermen in northeast garb, gossipy café waitresses, and a whole bunch of multi-generational locals who give Brad and Elaine a frosty reception.

Not when the storms are coming.

Clark’s Harbor, turns out, is beset by Gothic weather that would make the Brontë sisters go: “Hey, cool it with the atmospheric symbolism.” Lightning forks across moody purple skies, clouds roll in over swaying fishing boats, and storms break… and break… and break… against the strangely abandoned Victorian mansion that Brad has decided he has to live in. It’s on a hill called Devil’s Elbow. Across the bay from Devil’s Kneecap, I’m guessing. Just up the coastline from That Bruise the Devil Can’t Remember How He Got.

Everyone loves a massive coincidence, and in this story, the coincidence is the Palmer family. Their son, Robby, was diagnosed in Seattle as being severely autistic (this was in the early, early days of modern autism research, and it was kind of a hot topic in literature for a while. It was only three years after autism was officially separated from schizophrenia in medical literature, and horror writers in particular latched onto it). 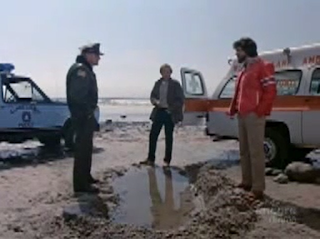 The Palmers, wanting a quiet and more easily structured life away from the city, moved down to Clark’s Harbor the year before. Since then, Robby’s made a miraculous transformation. He now behaves like any other boy his age, as though he’d never been anything different.

Brad right away finds this impossibly suspicious, but he can’t ignore that it seems to be happening.

Like any reasonable mental health expert, Brad begins to wonder if Robby’s recovery might be related to the high number of storms. It’s not totally out of left field, on the first night the Palmers rolled into town, they camped on the beach during a terrible storm – because if there’s one thing parents of autistic children know is a good idea it’s moving houses without a plan and sleeping in an unfamiliar setting during a thunderstorm. The Palmers are on the ball. Weirdly, though, that first night is when Robby started to change for the better.

In a casual session with Brad, Robby explains that he finds the storms soothing, but they put him in a kind of trance, and afterwards he doesn’t remember anything he did during the night before. (Storms only happen at night, you see.) At least once he’s snuck out with his younger sister Missy, and during a recent storm they lost track of the family dog…

The whole thing would just be a small peculiarity if it wasn’t for the murders. Every storm, a stranger dies. Someone from out of town, or not originally from Clark’s Harbor, turns up extremely dead in the morning. It’s pretty gruesome stuff, too. They’re usually found buried up to their necks in pits on the beach, then slowly drowned as the tide comes in. This is why the locals don’t like getting too close to newcomers, and also why Brad, Elaine, and the Palmers are all in more danger than they know.

There might be ghosts. Maybe. It's probably a serial killer, or the spirits that killed the last couple to live in Devil's Elbow, it's all very vague.

Which brings us to the biggest trouble with Cry for the Strangers. In its efforts to leave things eerily unexplained, keeping the madness door and the ghost door open at the same time for as long as possible, it doesn’t explain much. Or anything, really. Events just happen. Tension builds, but never suspense. The plotting is muddled and unsatisfying. The ending literally has Elaine asking about the many plot holes while Brad stares into the distance and tells us we’ll never know the answers.

It’s worth checking out only if you’re extremely bored, or if you find Patrick Duffy with a cheesy academic-type beard hilarious, which I do. (It looks very Amityville Horror, but like the low-fat yogurt version. Brad is the diet soda of horror protagonists. I love him.) 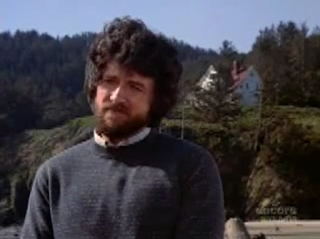 What’s totally worth checking out, regardless of your boredom levels, are the other posts in this blogathon! Yay! The master list posts on Sept. 22 on Realweegiemidget’s blog, so be sure to stop by. And if you’re in the mood for more Dallas tie-ins while you wait, you can check out Larry Hagman in these I Dream of Jeannie recaps.