Suspense: A Friend to Alexander 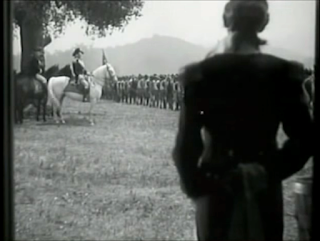 With Lin-Manuel Miranda’s hip-hop biography of the first secretary of the treasure cleaning up at the Tonys, A-Ham is the current historical celebrity craze. Soon, he’ll be fighting vampires. You haven’t really made it until everyone forgets why you’re important.

In 1942, James Thurber – who you might know best as the author of “The Secret Life of Walter Mitty” – wrote one of his darkest, weirdest short stories. In it, an unhappy man is plagued by dreams of Aaron Burr, and becomes gradually obsessed with the duel that killed Alexander Hamilton. Things only go downhill from there, getting all fantastical and grim.

It's called “A Friend to Alexander” and the version below is from August of 1943. It stars Geraldine Fitzgerald and Robert Young, and was adapted very faithfully by Fria Howard. Her script would also be used for the 1944 broadcast of the story, which featured Geraldine Fitzgerald reprising her role, but saw Robert Young replaced with Richard Whorf.

The third broadcast featured a new script by Fran Von Hardesfelt, with John Dehner and Paula Winslow as Mr. and Mrs. Andrews. Howard's adaptation is extremely faithful to the short story, while Von Hardesfelt's is a little more loosey goosey.

If you'd like to read the original short story, it's anthologized in My World, and Welcome to It alongside less gothic stuff.
Posted by Jaina