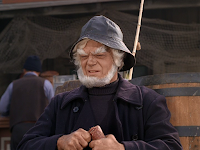 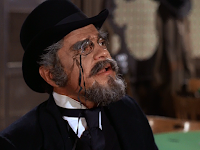 By 1965, Ross Martin had already been a scene-stealing sidekick. As Andamo in Blake Edward’s Mr. Lucky, he’d proven that not only could he handle the comedic timing necessary to counterpoint a smooth, ladies’ man hero, he could also lend an unexpected credibility to fantastic situations.

He was just the man Michael Garrison would need to balance the high rolling Easterner in his new twist on the super spy craze. Garrison had bought the rights to James Bond’s first television appearance in a Climax! adaptation of Casino Royale, and since then had been toying with ideas for bringing the Bond ethos to primetime. His solution was a breezier take on spies, without going to the full-on spoofs that would begin emerging in 1966, and he wanted it set in the 1870’s. Combining the fading Western with the latest trend.

Robert Conrad would be James West, originally seen as a more undercover operative complete with secret identity and false backstory, and Ross Martin would be Artemus Gordon. Gordon was to be the gadget man, the brains of the operation, and a master of disguise.

Artie was not a typical or stock character for Westerns, and that presented a problem. Especially when Garrison proved that he had a hard time staying on budget, and a revolving door of producers provided a notoriously uneven first season. (For four episodes, the central duo suddenly have a butler named Tennyson who disappears as uneventfully as he arrives.)

Martin told the Newark Evening News in May of 1966 that he’d tried to quit three times during that hectic first season. “Each producer tried to put his stamp on the show and I had a terrible struggle,” he recalled, “I fought them line by line in every script. They knew they couldn’t change the James West role very much, but it was open season on Artemus Gordon because they had never seen anything like him before.”

But by the second season, the behind-the-scenes stress had levelled out and a consistent voice was found in producer Bruce Lansbury, who was more than happy to emphasize the differing skills of the two leads. Particularly the idea of a weekly disguise for Artemus Gordon.

Ross Martin told TV Guide in 1966 that role had become a “show-off’s showcase” – and now, instead of being slumped over in a corner while West finished off twenty goons single-handedly, he was part of the story. In fact, he became so integral, that when he suffered a heart-attack during the show’s fourth season and was temporarily replaced, it was… not so great. The show really suffered in his absence.

Artie’s disguises usually started with a bare bones idea in the script. Then Ross Martin would make a sketch of what he wanted to do for the character’s look, and discuss the performance quirks with the director. Once it was all hashed out, he’d get together with the costume department, his makeup artist, a wig maker, and even a cobbler to polish off the finer details.

And it really paid off, as we’ll see as we count down his top five disguises: 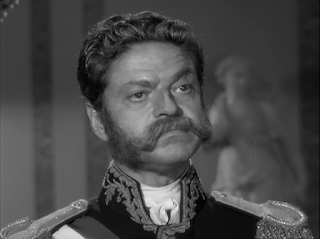 5. The Grand Elector of Saxony

“Everybody knows the Grand Elector of Saxony! In all the capitals of the world, I come and go as I please!”

That’s how you get into a party at the Albanian Embassy without an invitation.

In the season one episode “The Night of the Dancing Death” there’s a lot going on. There’s a sinister prince who is obsessed with literally fighting a bear in hand-to-hand combat, there’s a giant hole in the floor that opens up directly over a ballroom full of dignitaries, there’s a pretty lady switcheroo and a newfangled typewriter, and yet somehow the first thing everybody talks about is Artie’s disguise as a pompous dignitary. 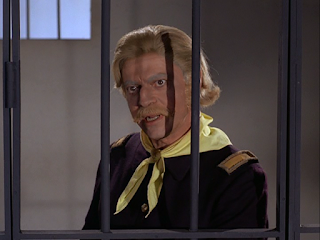 This is the best example of an Artemus Gordon disguise being more interesting than the episode it happens in. In “The Night of the Arrow,” West and Gordon are tasked with investigating a genocidal General’s recent successes. They come at it from opposite directions, with West trying to broker a truce with the Cheyenne while Artie goes undercover as a cavalryman.

He becomes proud Southerner and notable alcoholic Lt. Greely, who likes to remind people that the Civil War is over and that a true officer is never sober. It’s all part of a plan to get thrown in the stocks, but I would easily watch a whole show about this guy.

It’s also one of the few times he goes blond for a disguise, and his eyebrows look weird. 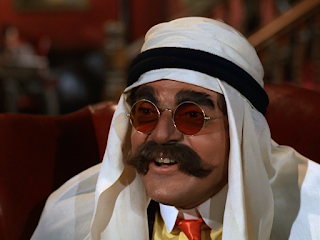 In “The Night of the Doomsday Formula” we’re treated to two separate disguises. The first is simply an impersonation of a missing scientist who’s invented an unstoppable chemical weapon. Pretty straightforward for the Secret Service’s man of many faces.

Next up, in order to infiltrate the Hadrian Club and face off against a dastardly arms dealer played by Kevin McCarthy, Artemus overreaches. It’s a pretty good sign that a disguise which is supposed to be a failure in the story itself has grown to be a fan favourite. The dastardly arms dealer isn’t falling for any of it when Artie tries to buy his way into the inner circle of doomsday device shoppers, but he keeps him around.

The best part is a sitar performance that goes awry when Artie’s pre-recorded music starts to skip. 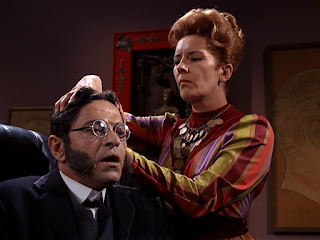 In the final act of “The Night of the Undead,” phrenologist Phala recognizes the bumps on the head of Major Brainard, a bombastic Teddy Roosevelt type, as the same as the bumps she found on meek Beldon Scoville Jr.

Beldon had tumbled into a waterfront dive seemingly by accident, looking for a voodoo medallion to match one he’d already happened to find. He wanted to have a pair of earrings made for his Aunt Maude, despite the fact that those earrings would be hideously unwearable. What Phala thinks is that Beldon Scoville has disguised himself as Major Brainard – what she doesn’t know is that it’s all Artemus Gordon. 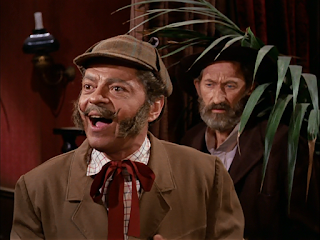 “The Night of the Colonel’s Ghost” is a taut, creepy episode soaked in atmosphere and whodunit tension. As the body count rises in a haunted town, it’s only a matter of time before Artemus Gordon shows up to make sure Jim West doesn’t wind up with the next broken neck.

Of course, he couldn’t just show up as anybody, because even though there’s no way for the people of Gibsonville to recognize him, he has his job description. He dons his ultimate disguise as British big game hunter and tin star enthusiast Ian Jellicoe Cooper-Featherstone, a man who is absolute chuffed to be in a cursed town.

“It’s Sir Ian Jellicoe Cooper-Featherstone,” he cheerfully tells everybody gathered in the parlour after the most recent murder, “You may call me Sir.”

He manages to convince everybody except a green-feathered parrot who delights in chirping out: “Fraud! Fraud!” whenever he’s in the room. West is probably more amused by this than a good friend should be... 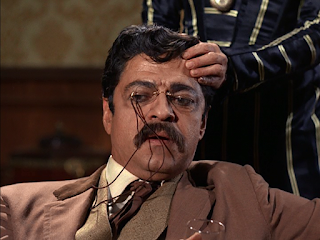 So that’s my top five! I’m sure I missed some favourites, because with over a hundred disguises under his belt, it’s a really tough thing to narrow down.

And don’t forget to check out the other fun and fabulous entries in the Classic TV Sidekicks Blogathon! It's been a great event with a ton of wonderful articles highlighting the finest supporting players in a century of great TV. I've really enjoyed participating in my first blogathan!